Home » Gardening Tips » Which Wheelbarrow Should I Buy? 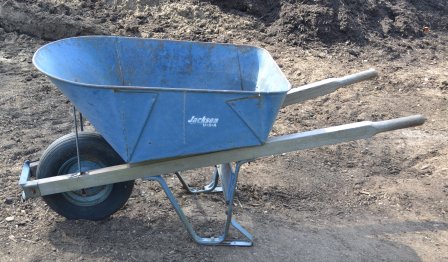 Many of the others are imitations that are poorly designed.

I’ll never buy a two wheel wheelbarrow and this is why:

3.  Pushing a wheelbarrow is like flying a plane.  As soon as you add a second wheel you are no longer flying or gliding around the corners.  When you have two wheels you literally have to circle the wheelbarrow to make turn.  Think about that.  You have to walk in a wide circle to make a turn. Then the lip snapped off of the front one of the wheelbarrows while I was using it.  The plastic just snapped!  Then it happened to the other one!

Replacing the handles on a wheelbarrow is expensive and time consuming!  Only to have the tub crack and break???  Yeah!  I’m frustrated and not at all happy with the orange wheelbarrows!

In all fairness to other plastic wheelbarrow manufactures I used to have a “red” plastic wheelbarrow that I had for so long the sun faded it and it turned “pink”.  Yeah, I took some flack because I had a “pink wheelbarrow”.  But that wheelbarrow, I think it was an Ames, held up for a long, long time.  The handles did not break nor did the plastic tub.

I’m not a big fan of plastic wheelbarrows for topsoil, sand or concrete because the tubs flex, and that’s really hard on your back when that happens, but at least my “Pink Ames Wheelbarrow” held up as it should and it was awesome for moving mulch.

I’m going to give you some tips on how to properly use a wheelbarrow to make your life easier and how not to hurt your back.

First, you have to start out with a good wheelbarrow.

When shopping for a wheelbarrow it is very important to see where the tire is located in relation to the tub. You want the wheel and axle to be under the tub to carry the weight of the load. On some wheelbarrows you will notice that the tire sets out in front and all the weight ends up on your hands.

Now when loading your wheelbarrow, you can put as much in as it can hold, but before you take off through the yard, use a shovel to redistribute the contents of the tub towards the front, giving most of the weight to the wheel and leaving you and your back with the lighter end of the wheelbarrow.

'Blue Angel'hosta is by far one of my favorite blue hostas. A big hosta like this in a perennial bed covers a lot of area and that keeps a ton of weeds at bay! These giant heart shaped leaves are very slug resistant. We have this plant in full sun. With … END_OF_DOCUMENT_TOKEN_TO_BE_REPLACED

'Big Daddy' hosta is one of my favorite big hostas, mostly because it's big, it's blue and it has very interested leaves that are a bit dimpled. Big Daddy hosta gets about 24" tall and 36" wide. It's hardy in zones 3 through 9, the flowers are blends of … END_OF_DOCUMENT_TOKEN_TO_BE_REPLACED

We sold out of 'Humpback Whale' hosta pretty early this year. Humpback Whale is pretty impressive hosta and this one really hasn't matured yet because they can get three feet high and 7 feet wide. I've also seen photos of them that show them to be a lot … END_OF_DOCUMENT_TOKEN_TO_BE_REPLACED

How pretty is that? And it's a ground hugging perennial that comes back year and year. These plants were new to our nursery last year so Pam and I planted three of them in our landscape at home. Not only did they do really well last year but they wintered … END_OF_DOCUMENT_TOKEN_TO_BE_REPLACED

I've been working on my perennial bed at the nursery and this Electric Red Dianthus caught my eye and was screaming "make my picture". So I did! Dianthus in general are great perennials for your garden. They are super winter hardy even here in cold … END_OF_DOCUMENT_TOKEN_TO_BE_REPLACED