Home » Backyard Living » How to Get Rid of Standing Water in Your Yard. 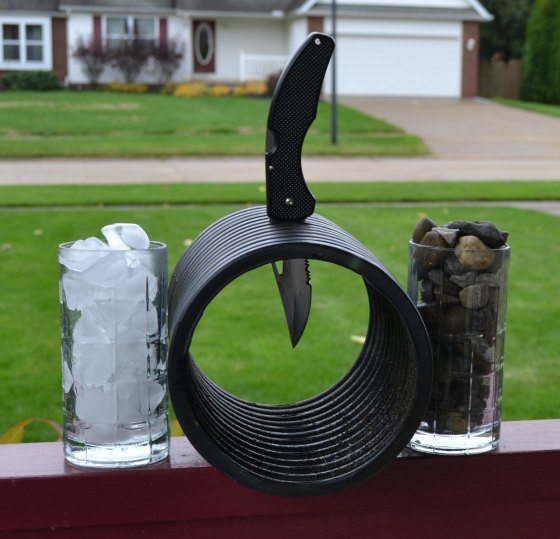 If you have a place or places in your yard that have standing water and I know a lot of people do, there are ways to make that water disappear and in this post and video I’m going to explain how you can go about that.

Typically people try and buy topsoil to fill those low areas and sometimes that works, if there is a way to divert that water and actually get it to drain away, or disperse evenly over a large area where it can both evaporate and seep in.  But usually trying to fill the area with topsoil only moves the water to another spot in the yard.

Using the system that I explain in this video you can use perforated drainage pipe collect the water in the wet areas and move that water underground allowing it to seep into the soil.

When you have water that stands in one spot for very long the soil closest to the surface in that area becomes quite compacted to the point that it just won’t accept water from the surface.  This is usually just the top couple of inches.

Even at my nursery where my soil drains really, really well, standing water does compact the soil near the surface, preventing that water from seeping into the soil.  The secret is to create a porous area using washed gravel that will allow the water to seep into the ground.  The water is then collected into the perforated pipe.  The water actually seeps into the pipe through the perforations. In this photo you can’t see the perforations but they are there, all the way around the pipe in every other rib.  This is evident with the photos where I stuck a knife into one of the drainage slits.  I prefer this type of perforated pipe for a couple of reasons. A knife indicates where the openings are in this perforated pipe.

This system is also known as a french drain.  Basically you dig a trench, put washed gravel in the bottom of the trench, the more washed gravel the better, then a perforated drainage pipe, usually 6″ or larger but 6″ works well.  The cover fill the trench complete to the top with washed stone in the areas where you actually want to collect the water.  The rest of the trench can be back filled with same soil you took out of the trench, but in the areas where was was standing before you started fill that trench to the top with washed stone.

By using a perforated pipe that is 20, 30, 4o, or 50 feet or longer the water has plenty of room to spread out underground and eventually seep or leach into the ground.  Most importantly, that perforated pipe needs to have a little bit of fall as it runs away from the area where the water is collected at the surface.  In other words, the pipe needs to run down hill ever so slightly.  6″ of fall over 100 lineal feet is probably enough to make sure the water finds it’s way all the way to the end of the pipe.

Lots and lots of Washed Gravel. Comparing Washed Stone to Ice Cubes in a Glass

Just Like Ice Cubes in a Glass of Water.

To enhance this system further you should put from 18″ to 24″ of washed gravel under the pipe.  To understand how important washed gravel is under the pipe think about a tall glass filled to the top with ice.  The glass is completely full.  Or is it?  It is not because even though the tall glass is completely full of ice, you can still add many ounces of liquid beverage to that glass because of the voids between the ice cubes.

That’s how washed gravel works.  Even though the washed gravel fills up a lot of space in the trench, a great deal of water can seep in and around that washed gravel and eventually all of that water seeps into the ground.

This system allows you to move water from the surface of the soil and relocate it and disperse it over a large area underground.  It’s exactly how a septic system works.  A septic system has leach lines that allow almost clear water to spill out of the septic tank into a line that runs into a small distribution box where that water is divided up and diverted in several different leach lines giving the water ample time and space to leach into the ground.  The solids that go into a septic tank separate from the water in the tank and only the water leaves the tank.

That’s exactly how french drains work.  They work just like leach lines except instead of the water coming from a tank, it is collected from the surface of the soil where it would otherwise stand and become stagnate.

It’s also important to completely cover the perforated pipe completely in the trench with washed stone.  This helps to keep soil from seeping into the pipe.  You want the pipe to remain clear so it works for a very long time.

These days you can actually buy perforated pipe that is coated with stone like material then a mesh material over that to keep the pipe free of dirt and debris while at the same time allowing water to seep in.

We sold out of 'Humpback Whale' hosta pretty early this year. Humpback Whale is pretty impressive hosta and this one really hasn't matured yet because they can get three feet high and 7 feet wide. I've also seen photos of them that show them to be a lot … END_OF_DOCUMENT_TOKEN_TO_BE_REPLACED

How pretty is that? And it's a ground hugging perennial that comes back year and year. These plants were new to our nursery last year so Pam and I planted three of them in our landscape at home. Not only did they do really well last year but they wintered … END_OF_DOCUMENT_TOKEN_TO_BE_REPLACED

I've been working on my perennial bed at the nursery and this Electric Red Dianthus caught my eye and was screaming "make my picture". So I did! Dianthus in general are great perennials for your garden. They are super winter hardy even here in cold … END_OF_DOCUMENT_TOKEN_TO_BE_REPLACED

Me and the donkeys made a movie for you about caring for your flower bulbs after they bloom. It seems to be that the standard practice is to roll the tops into a ball, put a rubber band around them and wait for them to turn brown before you cut them … END_OF_DOCUMENT_TOKEN_TO_BE_REPLACED

Listen up, me and the donkeys, Finnegan and Fergus, made a video for you that just might save you a giant headache when it comes to your power equipment. I made this giant mistake and hopefully this will make sure that it does not happen to you. Not … END_OF_DOCUMENT_TOKEN_TO_BE_REPLACED