Friends, I’ve been growing and have had Java Red Weigela in my landscape for years and I promise you, this is a very, very nice plant. Like almost all flowering shrubs it should be pruned at least once a year to maintain a nice shape, but the nice thing about Java Red is that it does not grow aggressively, but it does bloom aggressively in the spring.  But it also makes flowers in a lesser amount the rest of the year. 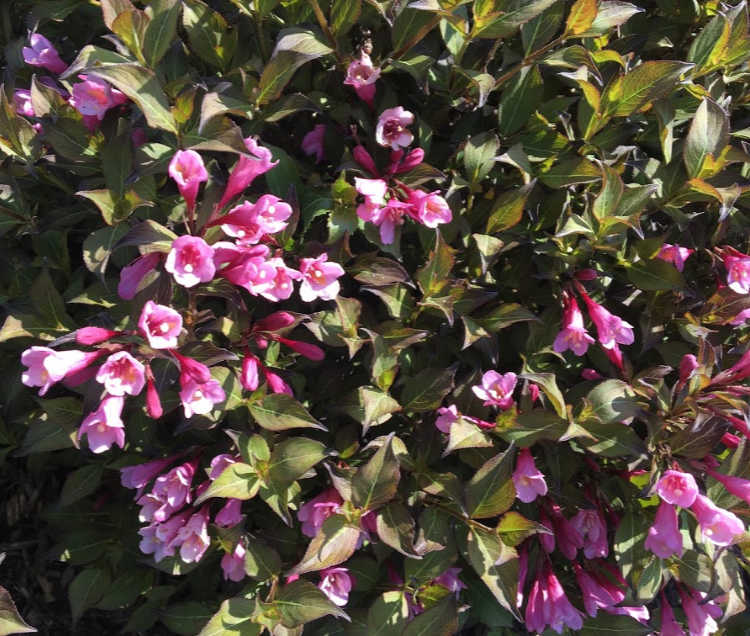 I’d like to explain why I think Java Red Weigela is such a great plant to grow and sell.
1.     It’s an awesome plant.  I sell a ton of them in my nursery.  People love the lavender flowers, they like the fact that it not only flowers in the spring but will also produce a few blooms later in the summer.  It has a purple tinge to the leaf color that also makes it attractive and it can be kept trimmed to a nice, manageable size in the landscape.
2.    It’s easy to propagate at home.  It is very easy to root.
3.    It can be rooted in the middle of summer with softwood cuttings.
4.    It can be rooted in the fall with semi-hardwood cuttings.
5.    It can be rooted in the dead of winter with hardwood cuttings.
6.    It’s not patented!  This plant will forever be in the public domain.  You and are free to propagate it at will without permission, and without paying anybody a royalty.
7.    They sell quickly and easily as rooted cuttings or small liners.  A liner is a rooted cutting that has been grown for one season, has a really strong root system and is lightly branched.  A rooted cutting will sell for 65 cents to 85 cents where a liner will bring $1.25 to $1.50. In the above photo this plant is probably trimmed a little tighter than most people like, but as soon as it flushes out with new growth it will look great. This photo shows the beautiful and delicate pinkish/lavender flowers.  You can also see the leaf color, green with a little maroon tint.  I’m not sure why they originally called this plant Java Red because there is nothing about the plant that is red.  But it is a nice addition to any landscape.

'Blue Angel'hosta is by far one of my favorite blue hostas. A big hosta like this in a perennial bed covers a lot of area and that keeps a ton of weeds at bay! These giant heart shaped leaves are very slug resistant. We have this plant in full sun. With … END_OF_DOCUMENT_TOKEN_TO_BE_REPLACED

'Big Daddy' hosta is one of my favorite big hostas, mostly because it's big, it's blue and it has very interested leaves that are a bit dimpled. Big Daddy hosta gets about 24" tall and 36" wide. It's hardy in zones 3 through 9, the flowers are blends of … END_OF_DOCUMENT_TOKEN_TO_BE_REPLACED

We sold out of 'Humpback Whale' hosta pretty early this year. Humpback Whale is pretty impressive hosta and this one really hasn't matured yet because they can get three feet high and 7 feet wide. I've also seen photos of them that show them to be a lot … END_OF_DOCUMENT_TOKEN_TO_BE_REPLACED

How pretty is that? And it's a ground hugging perennial that comes back year and year. These plants were new to our nursery last year so Pam and I planted three of them in our landscape at home. Not only did they do really well last year but they wintered … END_OF_DOCUMENT_TOKEN_TO_BE_REPLACED

I've been working on my perennial bed at the nursery and this Electric Red Dianthus caught my eye and was screaming "make my picture". So I did! Dianthus in general are great perennials for your garden. They are super winter hardy even here in cold … END_OF_DOCUMENT_TOKEN_TO_BE_REPLACED