Home » Gardening » How to Get Rid of Poison Ivy 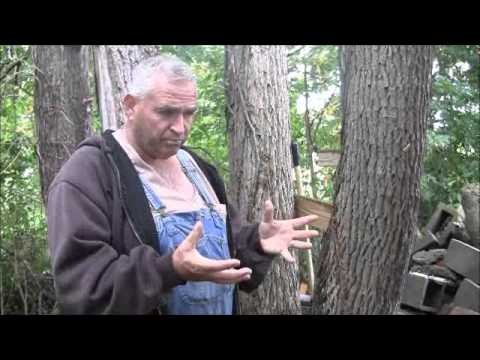 I often get asked how to get rid of poison ivy. And because I’ve got a situation on my property that has a really good stand of poison ivy that I have to deal with, I made you a video.

A while back I showed you How to Identify Poison Ivy.  This video is all about getting rid of it once you know that you have some in your yard or garden.

Most full-service garden stores sell sprays that will kill poison ivy and I recommend that you spray poison ivy and kill it rather than try and dig it out and physically remove it.

Poison ivy contains an oil that is released any time the plant is damaged in even the slightest way.  The leaves, vines, and roots all contain this super potent oil.

When the plant is damaged the oil is released in an invisible mist form and if you are close to the plant the oil gets on your skin and that starts the irritation that can quickly turn into an extremely and possibly dangerous situation.

When you dig, cut and chop poison ivy to remove it you are certain to release a considerable amount of this dangerous oil.  Therefore I am suggesting that you do not try and physically remove the vines.

In the situation that I show you in the video, I have been spraying this poison ivy throughout the growing season and I have successfully killed a great deal of it.

But some of these vines are growing way up into the trees where I cannot get the spray on the leaves of the poison ivy.  So I have resorted to cutting a very small section out of the vines, severing the largest part of the vines from the root system that support them.

In the video, I show you how much protective clothing I am putting on to make these four simple cuts.  As you’ll see in the video, I take poison ivy very seriously!  I’ve been infected many times and the older I get the less I enjoy dealing with a poison ivy rash.

Anytime that you think you might have come in contact with poison ivy you should wash all exposed areas of skin with a really strong detergent.  Most of us “older than you youngins” recommend Fels Naptha soap for removing poison ivy oil from your skin.

Fels Naptha is a heavy duty laundry soap bar used for pre-treating laundry stains but it is also the recommended choice for preventing poison ivy should you come in contact with it.  You should wash your skin as soon as possible after coming into contact with poison ivy.  Do not wait until the end of the day.

When I was in the landscaping business we always carried a bar of Fels Naptha soap in the truck.

Look to the left of my fist in this photo.  That huge vine is poison ivy.  I just discovered this as Duston and I were shooting this video.  That’s the craziest and scariest thing I’ve ever seen.

How long has that thing been growing?  I have to get rid of it but I am so allergic to poison ivy that I actually get nervous just looking at this vine.  Let alone cut into it.  Oh well, I’ll have to find a way and find the courage, I can’t leave it there.

Okay, I hope this post on how to get rid of poison ivy helps!

Comments?  Questions?  Post them below and I’ll do my best to get back here and answer them for you.