Some Harry Lauder’s Walking Stick plants (corylus avellana contorta) are being attacked and are dying slowly.

This doesn’t seem to be a widespread problem, but it is happening.  The disease that is attacking them is called Eastern Filbert Blight, which is a fungal type disease and not an insect problem.  If you have a plant that is showing signs of being infected it’s probably too late to apply a fungicide, but if you prune away infected wood you might be able to slow the progression of  the disease and if you catch it early enough you might be able to stop it completely.

Grow and Sell Small Plants from Home.  Mine have earned Thousands of dollars.

Harry Lauder’s is a very interesting and curious looking plant and an all time favorite plant among true plant lovers.  I am a huge fan of Harry Lauder’s Walking Stick and I like to grow them into single stem trees and I made a movie about that.

Here are some photos of a Harry Lauder’s Walking Stick that has been infected with the Eastern Filbert Blight.  You can see how devastating  this is. 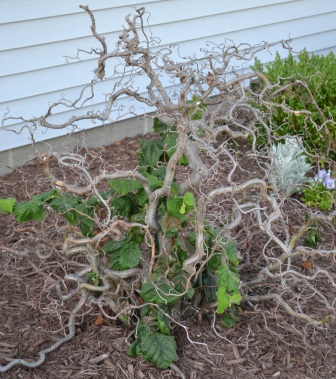 I took the above photo right in the middle of the growing season, so you can see that this plant is not at all healthy.  It should be covered with the crazy looking leaves that Harry Lauder’s is noted for, instead it has only a few healthy leaves near the bottom of the plant. If you look closely at the above photo you can see the little tiny diamond shaped, or football shaped black dots on the stem.  Those are cankers from the Eastern Filbert Blight.  For whatever reason, these cankers are almost always diamond shaped or football shaped.  On a healthy Harry Lauder’s Walking Stick you won’t see any spots like these at all.

If your plant has this condition you need to prune out any infected wood, and make sure you cut all the way back into healthy wood that is not infected.  Sterilize your pruners after each cut by dipping them in rubbing alcohol.  Don’t be concerned about how much wood you cut away.  Harry Lauder’s are vigorous growers and if you can save your plant it will recover quickly. 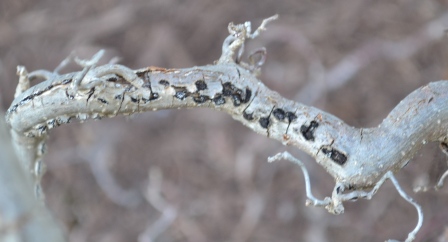 Now for the positive news about this dreaded disease.  At this time it does not appear to be widespread and I have a lot of these plants in my nursery, because they are like magnets for plant lovers.  People will drive miles and miles to buy a nice Harry Lauder’s Walking Stick.  And you are a member of our group you can buy small plants for around $4.00 each.  And in most garden centers a Harry Lauder’s in only a 2 gallon container is going to be $59.00 or more.

Grow and Sell Small Plants from Home.  Mine have earned Thousands of dollars.

'Blue Angel'hosta is by far one of my favorite blue hostas. A big hosta like this in a perennial bed covers a lot of area and that keeps a ton of weeds at bay! These giant heart shaped leaves are very slug resistant. We have this plant in full sun. With … END_OF_DOCUMENT_TOKEN_TO_BE_REPLACED

'Big Daddy' hosta is one of my favorite big hostas, mostly because it's big, it's blue and it has very interested leaves that are a bit dimpled. Big Daddy hosta gets about 24" tall and 36" wide. It's hardy in zones 3 through 9, the flowers are blends of … END_OF_DOCUMENT_TOKEN_TO_BE_REPLACED

We sold out of 'Humpback Whale' hosta pretty early this year. Humpback Whale is pretty impressive hosta and this one really hasn't matured yet because they can get three feet high and 7 feet wide. I've also seen photos of them that show them to be a lot … END_OF_DOCUMENT_TOKEN_TO_BE_REPLACED

How pretty is that? And it's a ground hugging perennial that comes back year and year. These plants were new to our nursery last year so Pam and I planted three of them in our landscape at home. Not only did they do really well last year but they wintered … END_OF_DOCUMENT_TOKEN_TO_BE_REPLACED

I've been working on my perennial bed at the nursery and this Electric Red Dianthus caught my eye and was screaming "make my picture". So I did! Dianthus in general are great perennials for your garden. They are super winter hardy even here in cold … END_OF_DOCUMENT_TOKEN_TO_BE_REPLACED