I’ve got these two Irish Miniature Donkeys that I just bought and I need to build for them some kind of a shelter house or small barn so I thought that I would document the process so maybe somebody some where, some day might benefit from my efforts.

How do I know that my Miniature Donkeys are Irish?  Because we’ve given them Irish names!  I asked my subscribers for help with that and we got a ton of great suggestions, take a peek and meet the donkeys.

Building Shelter for My Miniature Donkeys. 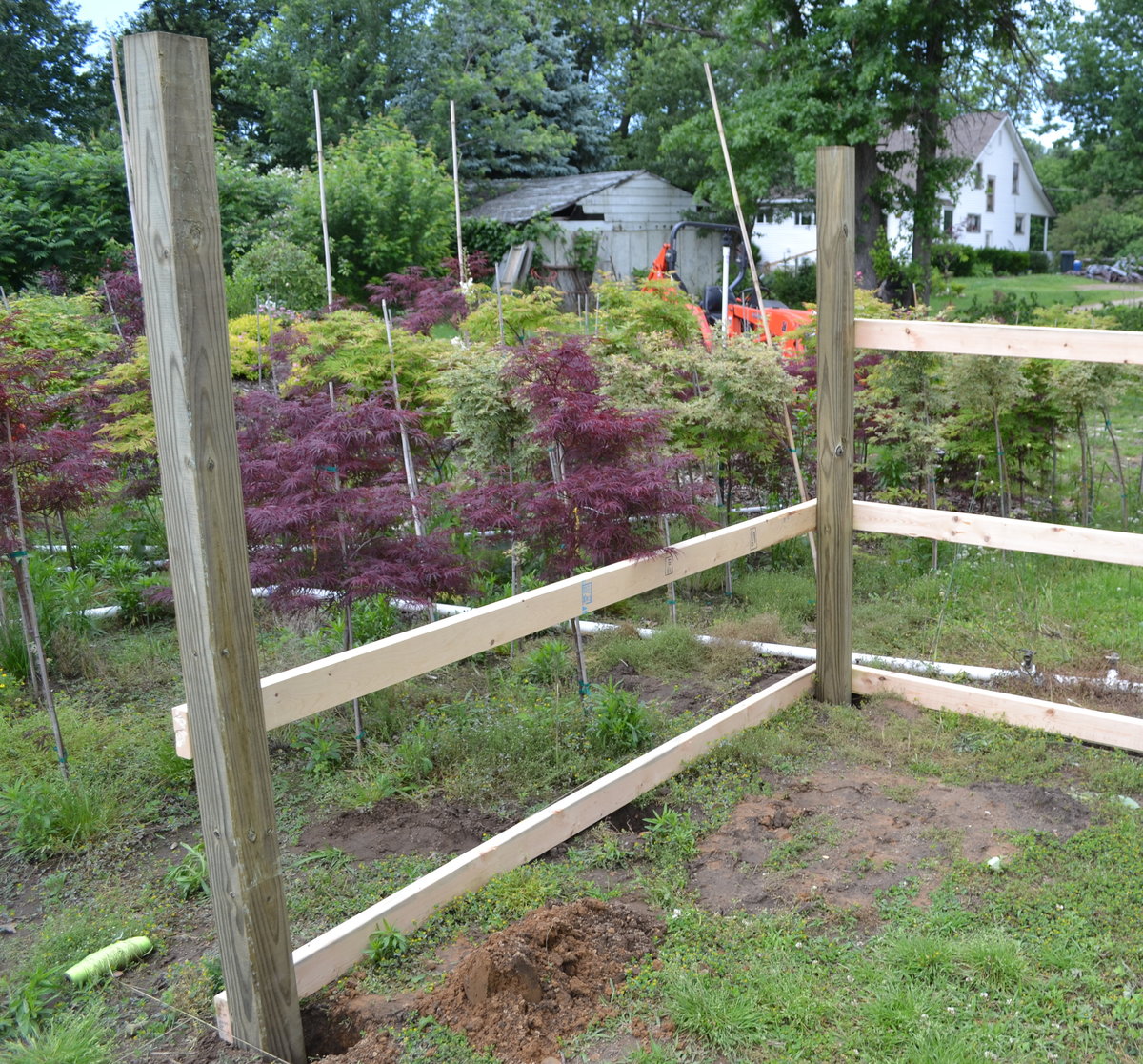 The start of a miniature donkey shelter house.

When I built the donkey shelter shown on this page I didn’t anticipate a winter with temps of -15 degrees F.  That’s way below zero!  They did okay but I was concerned and promised them a warmer house come spring.

Here are their New Digs, Much, Much Warmer!

I know that you are going to ask me for the plans, but there are no plans.  I started with an idea of what I would do and pretty much went into “wing it” mode from there.  I’m not much of a carpenter so you can critique this all you want, I did the best I know how.

First thing I did was lay out the foundation with mason’s line to establish the size and get it as square as possible.  My donkey shelter is approximately 8′ by 8′.  Might be off a tad.  Actually I think I made it 96″ by 93″ and it would have been easier if I had made it 92″ by 92″ since the materials are all 96″ in length, but the overall size gets a little wider as you add materials to the outside of your posts.

When you lay out the foundation with the mason’s line, make sure you extend the string and pins well beyond the actual dimensions, that way you don’t disturb the pins as you dig and work. 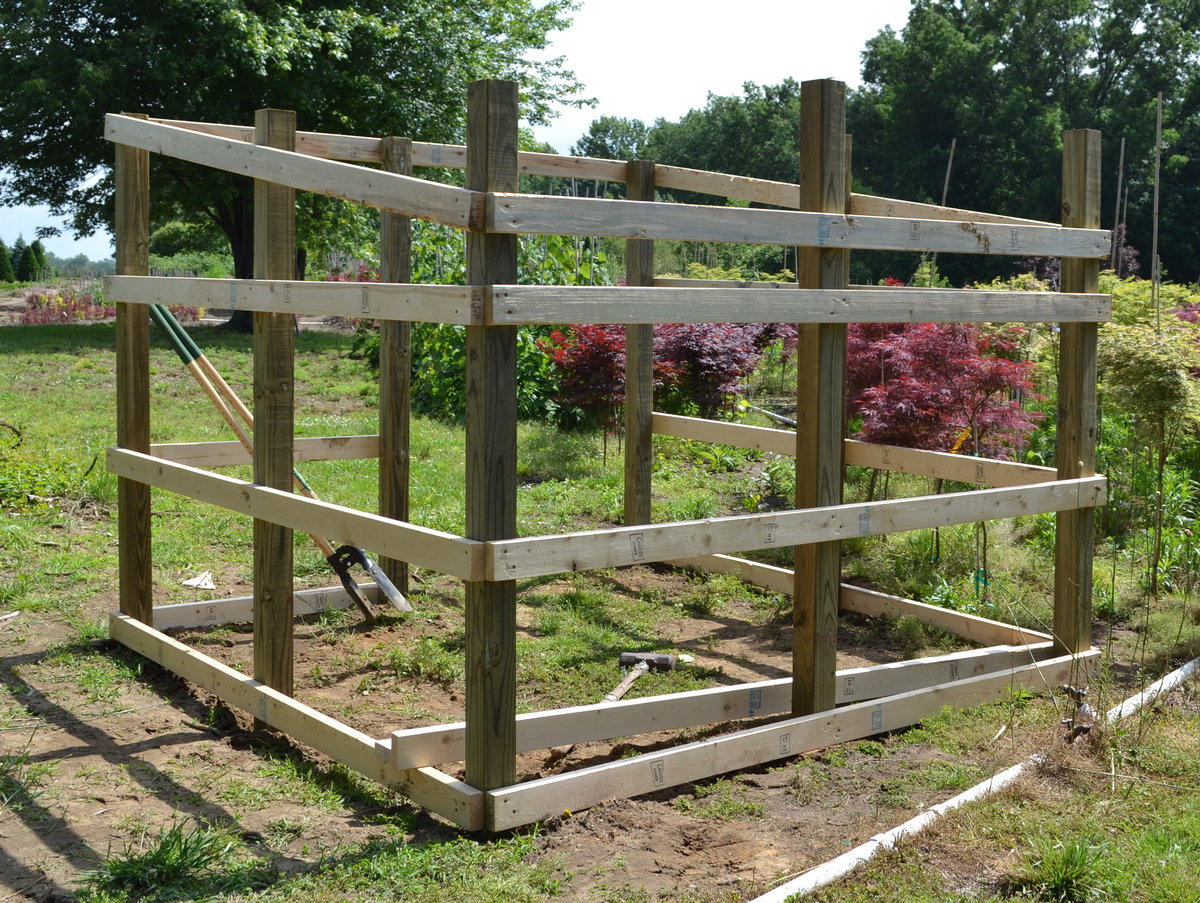 Using the same idea behind a pole building I used treated 4″ by 4″ by 8′ posts for my uprights.  With a post hole digger I put them about 24″ into the ground.  Then added 2″ by 4″ purlins around the outside for support and to give me something to attach the T1-11 siding to. Joist Hanger for the Roof Supports. The roof line with the joists in place.  Is this strong enough to support a heavy snow load?  I hope so.  Since I’ll be out there everyday to feed and water the Miniature Donkeys I can clear snow from the roof when it becomes necessary. 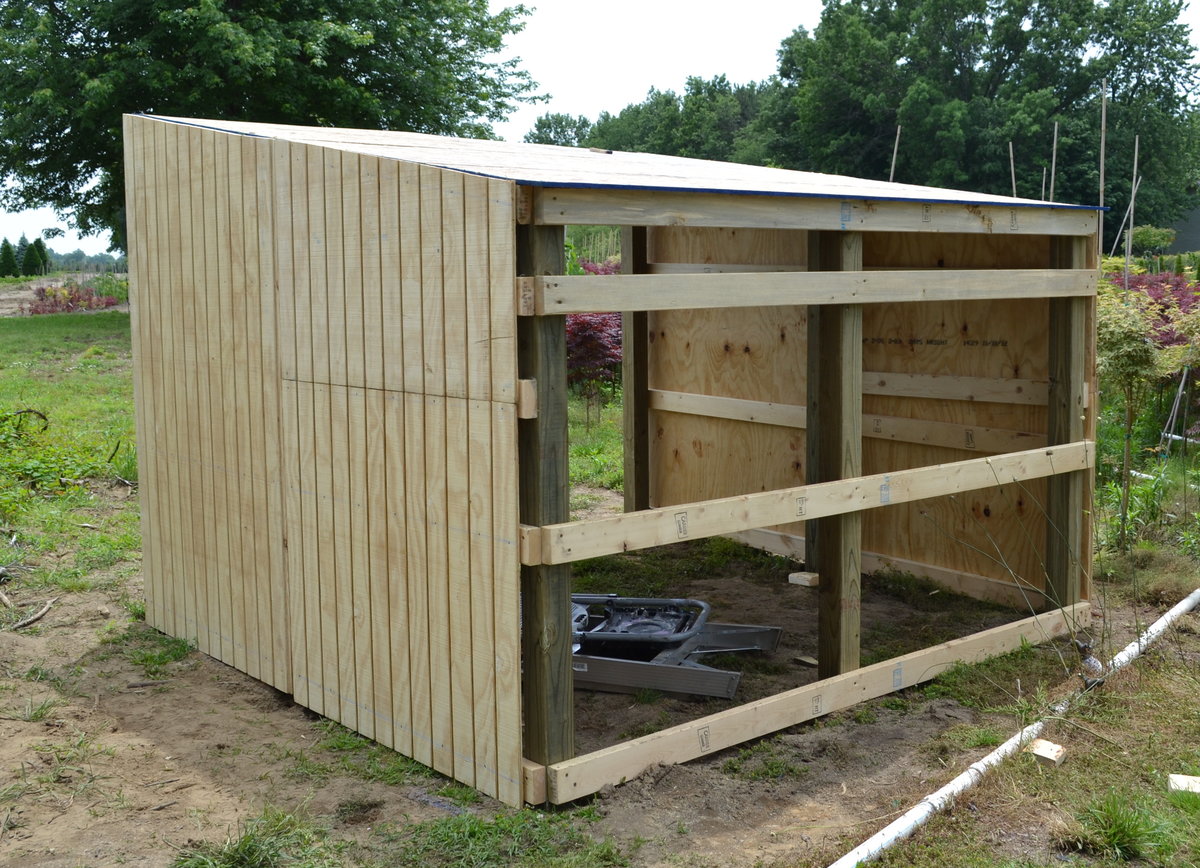 This Miniature Donkey Shelter House faces south east but is open in the front so the donkeys can come and go as they please.  I’m new to the world of miniature donkeys so all I can do is take advice from those with more experience than I have.  They tell me to not close up the house, leave an opening so the donkeys can go inside during storms or extremely cold weather.  I am told the prefer to be outside most of the time.

With years of experience in the Nursery Business I know that the lower the structure, the warmer the structure, so at the front my miniature donkey shelter house is 6′ high and slopes down to 5′ high in the back.  I am also very aware of the natural heat from the ground so I opted not to put a wooden floor in this structure.  A wooden floor would allow cold air to get below the floor keeping the shelter colder than it need be.

Looking at the above photo you can see the 2 by 4 along the bottom.  What I am going to do is actually remove a little soil from under the 2 by 4 and allow some air flow under the siding during the summer months, then come fall I’ll just put soil or mulch around the base to eliminate that air flow sealing it up for the winter.  Come spring I’ll remove that soil.  I know that sounds crazy but I’ve got a Huge Pile of Potting Soil just a few feet away from the Donkey House so placing and removing the soil is not a problem.

Inside the Donkey House on the floor I’ll put heavy rubber stall mats.  You can get them from Tractor Supply. The inside of the miniature donkey shelter house.

I lined the inside of the Donkey Shelter with 7/16″ OSB Sheathing for two reasons.  Lining the inside of the shelter with sheathing creates an air space between the T1-11 siding on the outside and the sheathing on the inside.  This air space will help to insulate the shelter keeping warm air in and cold air out.  Keep in mind, the front of the shelter has a large opening, so it can only be so warm, but in some ways it reminds me of an igloo built into a snow bank.  It might be cold, but it’s more comfortable than being out in the wet weather and the wind.

Miniature Donkeys like to gnaw on wood so hopefully the sheathing will deter that a little.  It also covers up the treated wooden 4 by 4’s.  I’m told that treated wood can and will make the donkeys sick.  Some claim not, but many veterinarians claim that it will. 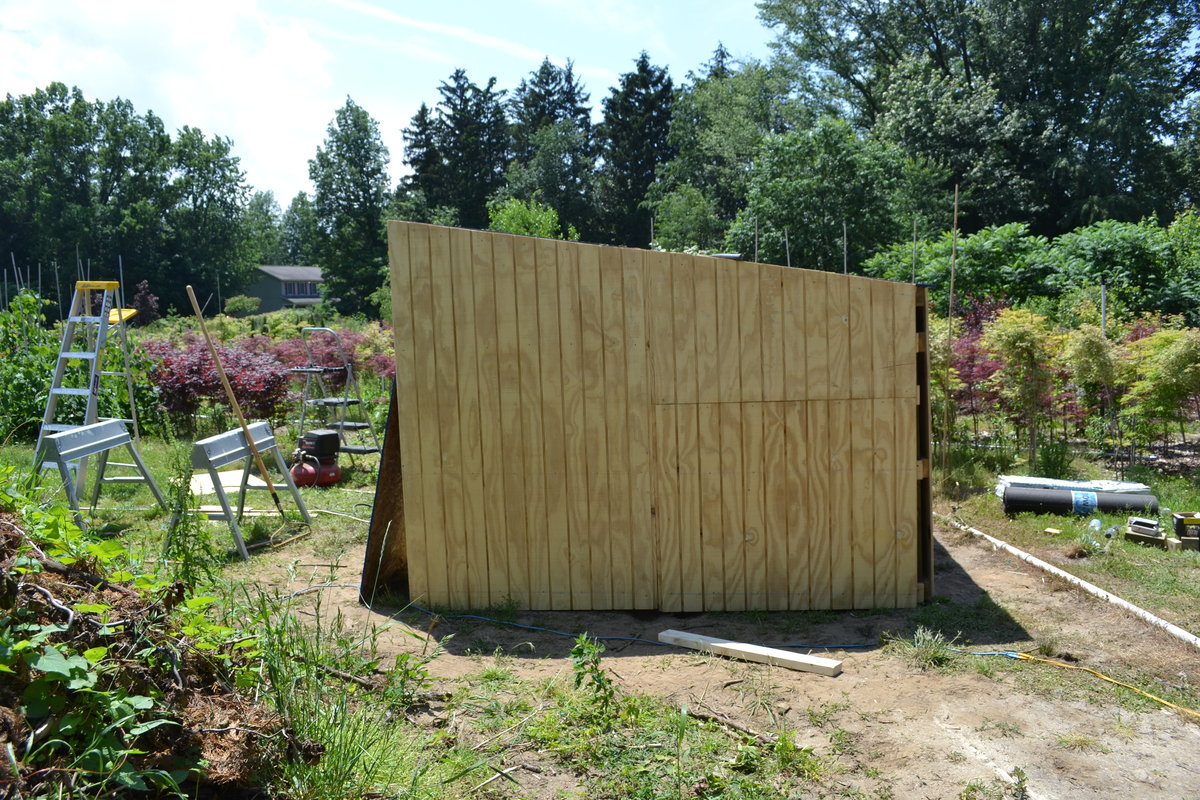 From the side you can see the slope of the roof.  At the back corner you can also see the gap on the corners.  Before the shingles went on I trimmed out the Donkey Shelter with 1″ by 4″ or 1″ by 6″ boards to seal up the corners. Putting felt paper and shingles on the donkey shelter house.

My 85 year old father-in-law helped me build the donkey house.  It was hot so we donned our summer hats!  It does him a world of good to do something with his hands.  He loves helping with projects like this.  And of course having his expertise around is also a huge help. Then we made a Miniature Donkey Shelter video to show off the finished product.  It ain’t perfect, but the donkeys don’t care as long as breakfast and dinner are served on time.

Today they have a Semi Underground Bedroom!  Check it out!

'Blue Angel'hosta is by far one of my favorite blue hostas. A big hosta like this in a perennial bed covers a lot of area and that keeps a ton of weeds at bay! These giant heart shaped leaves are very slug resistant. We have this plant in full sun. With … END_OF_DOCUMENT_TOKEN_TO_BE_REPLACED

'Big Daddy' hosta is one of my favorite big hostas, mostly because it's big, it's blue and it has very interested leaves that are a bit dimpled. Big Daddy hosta gets about 24" tall and 36" wide. It's hardy in zones 3 through 9, the flowers are blends of … END_OF_DOCUMENT_TOKEN_TO_BE_REPLACED

We sold out of 'Humpback Whale' hosta pretty early this year. Humpback Whale is pretty impressive hosta and this one really hasn't matured yet because they can get three feet high and 7 feet wide. I've also seen photos of them that show them to be a lot … END_OF_DOCUMENT_TOKEN_TO_BE_REPLACED

How pretty is that? And it's a ground hugging perennial that comes back year and year. These plants were new to our nursery last year so Pam and I planted three of them in our landscape at home. Not only did they do really well last year but they wintered … END_OF_DOCUMENT_TOKEN_TO_BE_REPLACED

I've been working on my perennial bed at the nursery and this Electric Red Dianthus caught my eye and was screaming "make my picture". So I did! Dianthus in general are great perennials for your garden. They are super winter hardy even here in cold … END_OF_DOCUMENT_TOKEN_TO_BE_REPLACED