Annabelle Hydrangea are the hydrangea that never fail to bloom. They bloom on current growth so the flower buds are never affected by frost or freezing temperatures. My plants and my cuttings did just fine last winter even though it got down to -21 below zero, so they are tough as nails. The unrooted hardwood cuttings also experienced those same temps and still rooted and grew like crazy. 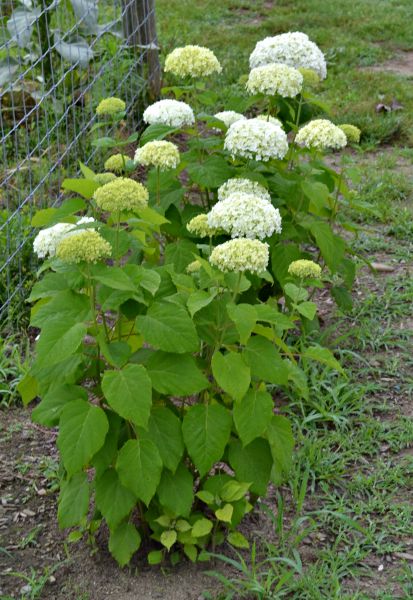 They won’t give you too much trouble if grown in average, medium moisture, well-drained soils in part shade. The Annabelle Hydrangea can handle full sun only if kept consistently moist. They aren’t very tolerant to drought conditions so the foliage might not grow as well as you’d like.

Bloom occurs on new wood, so prune the plants close to the ground in late winter to encourage stem growth. Weakened and/or damaged stems should be removed in early spring.

Prune anytime between October (or when the blooming is done) and April. Do not prune during the growing season. The plants starts growing like crazy in April, then come July they start making flower buds on the ends of the new branches and start blooming in late July. Here is a video I made at the nursery for you!

Me and the donkeys made a movie for you about caring for your flower bulbs after they bloom. It seems to be that the standard practice is to roll the tops into a ball, put a rubber band around them and wait for them to turn brown before you cut them … END_OF_DOCUMENT_TOKEN_TO_BE_REPLACED

Listen up, me and the donkeys, Finnegan and Fergus, made a video for you that just might save you a giant headache when it comes to your power equipment. I made this giant mistake and hopefully this will make sure that it does not happen to you. Not … END_OF_DOCUMENT_TOKEN_TO_BE_REPLACED

A couple of years ago I posted a video and some photos of the landscaping around our house and one guy said something like, "It's a good thing you know how to grow plants because your landscape design skills are terrible. So when I did an update I titled the … END_OF_DOCUMENT_TOKEN_TO_BE_REPLACED

One of Our Members, http://backyardgrowers.com/join, shared this article with the other members. It's a great article about long held gardening beliefs that just flat out are not true. I'd love to display the article here but I just don't have permission to … END_OF_DOCUMENT_TOKEN_TO_BE_REPLACED

It's that time of year when I have to put balls on the Japanese maples that we dug earlier this spring. On this page, https://mikesbackyardnursery.com/2021/04/how-to-put-a-ball-and-burlap-on-a-bare-root-tree-that-has-been-previously-dug/, I show you how I put … END_OF_DOCUMENT_TOKEN_TO_BE_REPLACED