Home » Complete Guides » Training Arborvitae and other Conical Evergreens to Grow with a Single Leader.

Trees and plants are no different than any other creature on the planet.  If you want them to be nice, to act right, you have to train them when they are young.

With conical evergreens like Spruce trees, pine tree and upright arborviate it’s important to train them when really young to produce only one main leader.  Often times when young they tend to produce multiple, competing leaders and it makes for not such a nice plant down the road.

For one thing, conical evergreens with multiple leaders are often pulled apart in the snow or wind and can split right now the middle.

Even with something as small as Dwarf Alberta Spruce, it’s really important to train them to a single leader and you do that by removing competing leaders. 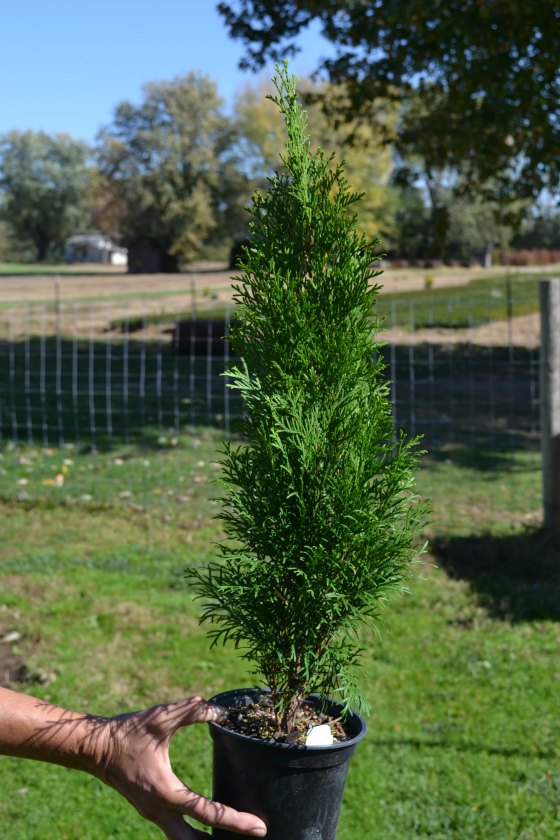 'Blue Angel'hosta is by far one of my favorite blue hostas. A big hosta like this in a perennial bed covers a lot of area and that keeps a ton of weeds at bay! These giant heart shaped leaves are very slug resistant. We have this plant in full sun. With … END_OF_DOCUMENT_TOKEN_TO_BE_REPLACED

'Big Daddy' hosta is one of my favorite big hostas, mostly because it's big, it's blue and it has very interested leaves that are a bit dimpled. Big Daddy hosta gets about 24" tall and 36" wide. It's hardy in zones 3 through 9, the flowers are blends of … END_OF_DOCUMENT_TOKEN_TO_BE_REPLACED

We sold out of 'Humpback Whale' hosta pretty early this year. Humpback Whale is pretty impressive hosta and this one really hasn't matured yet because they can get three feet high and 7 feet wide. I've also seen photos of them that show them to be a lot … END_OF_DOCUMENT_TOKEN_TO_BE_REPLACED

How pretty is that? And it's a ground hugging perennial that comes back year and year. These plants were new to our nursery last year so Pam and I planted three of them in our landscape at home. Not only did they do really well last year but they wintered … END_OF_DOCUMENT_TOKEN_TO_BE_REPLACED

I've been working on my perennial bed at the nursery and this Electric Red Dianthus caught my eye and was screaming "make my picture". So I did! Dianthus in general are great perennials for your garden. They are super winter hardy even here in cold … END_OF_DOCUMENT_TOKEN_TO_BE_REPLACED