Meet Roger Higgins from Roger’s Backyard Nursery in Cranesville, Pa.  Every one of those plastic jugs next to Roger contains seeds.  Some are perennial seeds, some might be Dogwood Seeds, maybe some Japanese maple seeds.

Some of the jugs are milk jugs, the bigger jugs are kitty litter jugs.  If you look closely Roger has each jug numbered and he has a record in the house of what’s in each jug.  Pretty organized right? 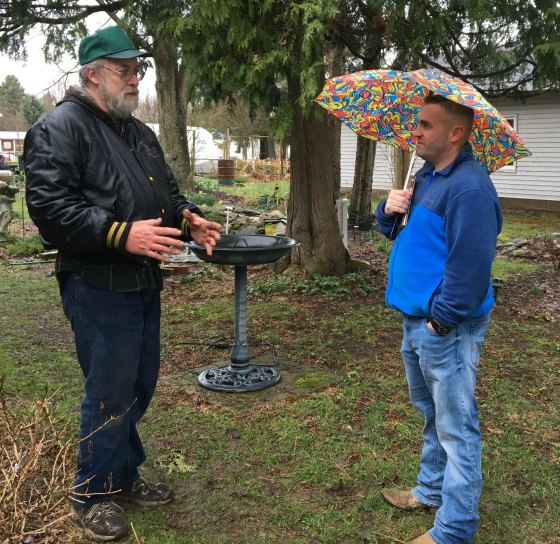 In our recent trip to Roger’s nursery Duston and I shot several videos that day with Roger.  It was raining and at times pretty much pouring.  Duston was shooting the videos with an I-pad and we didn’t want the device to get soaked so Roger went in and got Duston this cute umbrella.  To protect the device of course!  Roger and I got soaked, I was taking stills with my phone and it got soaked.  But we had a good time as you’ll see in the videos as I post them.

And we captured a lot of great information.

Roger will tell you that he is a machinist by trade and knew little about growing plants until he found https://mikesbackyardnursery.com/.  But I have to tell you, Roger has been an awesome student and he has the coolest backyard nursery ever, and he sells a lot of plants out of his backyard in the rural community of Cranesville, Pa.  And he’s a nice guy!

Be sure to watch the video as Roger and I discuss how he grows these seeds and he explains how he makes these little greenhouses out of plastic jugs.  Roger is an innovator and he found a way to improve upon a method that has been around for a long time.

In the video you can see how wet we are!

Thanks Roger for allowing us to invade your backyard and tell Venice that a little rain won’t hurt her.  She stayed in the house!  However, I’ll bet during plant selling season she gets plenty wet on rainy days while she tends to selling plants when Roger is at work.

Great people both of them!  Love having them as Members.

Me swapping spit with a donkey?
For those of you who love to see the donkeys, I’ve created a page just for you,
“The Donkey Chronicles”.

'Blue Angel'hosta is by far one of my favorite blue hostas. A big hosta like this in a perennial bed covers a lot of area and that keeps a ton of weeds at bay! These giant heart shaped leaves are very slug resistant. We have this plant in full sun. With … END_OF_DOCUMENT_TOKEN_TO_BE_REPLACED

'Big Daddy' hosta is one of my favorite big hostas, mostly because it's big, it's blue and it has very interested leaves that are a bit dimpled. Big Daddy hosta gets about 24" tall and 36" wide. It's hardy in zones 3 through 9, the flowers are blends of … END_OF_DOCUMENT_TOKEN_TO_BE_REPLACED

We sold out of 'Humpback Whale' hosta pretty early this year. Humpback Whale is pretty impressive hosta and this one really hasn't matured yet because they can get three feet high and 7 feet wide. I've also seen photos of them that show them to be a lot … END_OF_DOCUMENT_TOKEN_TO_BE_REPLACED

How pretty is that? And it's a ground hugging perennial that comes back year and year. These plants were new to our nursery last year so Pam and I planted three of them in our landscape at home. Not only did they do really well last year but they wintered … END_OF_DOCUMENT_TOKEN_TO_BE_REPLACED

I've been working on my perennial bed at the nursery and this Electric Red Dianthus caught my eye and was screaming "make my picture". So I did! Dianthus in general are great perennials for your garden. They are super winter hardy even here in cold … END_OF_DOCUMENT_TOKEN_TO_BE_REPLACED