The not so popular, not so well known member of the Azalea family are Exbury Azaleas which are deciduous, which means that they are not evergreens.  Many people don’t consider Azaleas evergreens because they don’t have needles, but the most popular, the most readily available Azaleas are Evergreen Azaleas.  They are red, white, pink and lavender with some variations or those colors.

The People Who Live Near You would Love to Buy Small Plants from You.
They, Really, really Do!  Take a Peek, Click here. Exbury Deciduous Azaleas are obviously not an evergreen, they do lose their leaves during the winter, but they are striking when in bloom!   And . . . they are colorful in ways that evergreen Azaleas are not because many of them are brilliant orange and yellow.  They grow taller than an evergreen azalea and can be used where you normally might use something like a Rhododendron or Viburnum.

Why?  Because they are difficult to grow from cuttings so few growers do them.  But they are relatively easy to grow from seed and you should be growing them from seed and selling them as small potted seedlings.  I would love to buy some small seedlings of these wonderful plants! 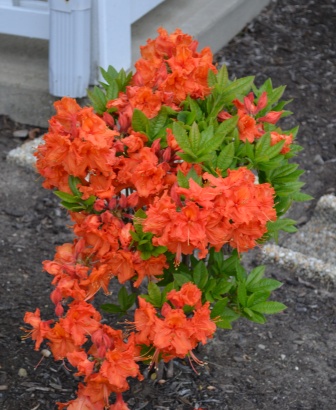 After Azaleas bloom they start to form a seed pod that stays on the plant all summer as the seeds inside the pod develop and mature.  In the fall these seed pods dry out and as they do they crack open and release up to 500 seeds per pod in the open air.  However, in a natural setting the conditions are usually not what is needed for the seeds to germinate so most if not all of the seeds go to waste.

You need to watch the seed pods and when they start to darken and dry out, usually September into October, clip off the seed pods and put them in an envelope or paper bag where they can finish drying and they will open up and release the seeds where you can capture them.

Once the seed pods have fully opened empty the contents into a tray of some kind and separate the seeds from the husks from the pod.  The seeds can be stored in a cool dry place until later in the winter when you can sow them.  If you sow them in the fall you’ll have to get creative trying to make sure the new seedlings receive enough light and stay happy all winter.  If you wait and sow them in February you’ll be keeping them inside for a shorter period of time which should increase your success at growing them.

Fill a flat with a good seed starting mixed and wet the medium really well.  Sow the seeds on top of the soil mix and press them down into the mix lightly.  Sprinkle a small amount of soil, really, really thin amount of soil over the seeds and water.  Allow the soil mix to dry out between waterings.  You don’t want the soil mix wet all the time for two reasons.

2.  You want the soil mix to be nice and warm so the seeds germinate quickly.

Water the flat, let the soil dry and warm up, then water again.

When growing seeds inside during the winter months it’s always a good idea to place a small fan near your seedling to keep the air circulating and fresh.  That helps a great deal in preventing damping off which is a fungal condition that attacks small seedlings.

After the seedlings sprout wait for them to produce their second set of leaves which are the true leaves.  Then you can transplant them into another flat spacing them about 1″ to 2″ apart for one full growing season.