Home » Gardening » How to Grow and Trim Japanese Maples. Grow and Sell Small Plants from Home.  Mine have Earned Thousands of Dollars.

You have to Trim Your Plants if you Want them to Look Good!

Getting a Laceleaf Weeping Japanese maple to look like this one in my landscape does not happen by accident.  If you start with a really small plant like this one . . . As you can see from this photo I have this small Crimson Queen tied to stake.  Keep in mind, this is a weeping plant.  Like all weeping plants, the only thing that it knows how to do on it’s own is weep.  So in order to get it to the height that you want it to be you have to train it to a stake, bamboo or another garden stake.

Just put the stake in the ground next to the plant then select a branch to act as a central leader.  Pull that branch upright and tie it to the stake.  If you don’t know what to use as a tie, one wrap of duct tape works pretty well but it only last for one season.  But that’s kind of a good thing, because eventually the ties have be removed and more ties have to be added to continue working to get the height that you need.

Look closely, the plant in the above photo is a grafted plant.  See the graft union right about the soil line? 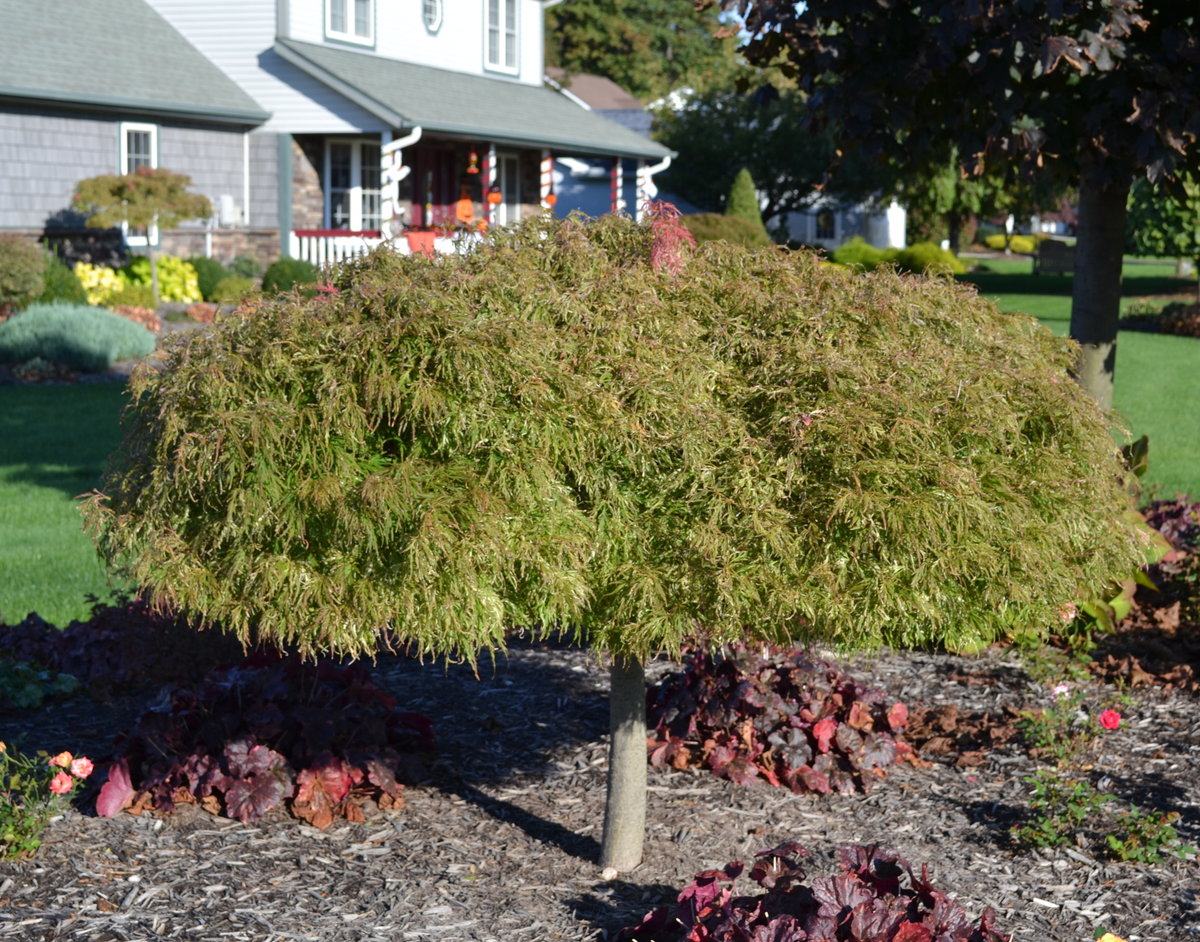 Goshiki Shidare is another of the lace leaf varieties of weeping Japanese maples.  It has variegated foliage.  Keep in mind that we started out with a skinny plant tied to a stake.  Once we get that skinny kid to the height that we desire we start shaping the plant.  Along the way if the small plant has rouge branches that are growing out away for the tree they should be pruned off.

Keep in mind, anything that needs to be removed from any plant, the sooner the better.  No matter what time of the year.  I prune 12 months a year as I take the notion.  That’s why I always carry pruning shears in the front pocket of my bibs.

Once your tree is to the height that you desire, stand back and picture in your mind how you want that tree to look.  Once you have that image in your mind, draw an imaginary line over the tree, and under the tree.  Any branches that are growing outside of that imaginary line need to be removed.  Just cut them back to the imaginary line.  Do this all the way around the plant, then just keep doing it two or three times a year.  Eventually you will have a nice full plant like you see in these photos. This is a Japanese Red Maple seedling, probably two years old.  Normally I don’t grow these myself from seed, I prefer to buy them from other growers.  I usually pay around $1.50 each for them.  What I used to do as soon as I took them out of the box was to cut the top of them to force them to fill out a little.

But I no longer do that.  I just pot them up and let them take care of themselves.  Since they are so slow growing leaving them unpruned for the first growing season doesn’t really hurt them at all.

As you can see from this photo taken at the very end of the growing season, this plant has started to lose it’s leaves and is pretty small and spindly.  That’s fine.  Come next spring that little tree will flush out and be covered with leaves and by mid summer small branches up and down the stem.

With Japanese Red Maple seedlings I find that they look better, and most people prefer to buy them when they are grown as multi stemmed plants.  So unlike the weeping trees, I do not remove buds from along the stem.  I allow those buds to develop into branches as you’ll see in the video on this page. This Orange Dream Japanese maple is an upright tree.  In other words, it does not weep and will grow a lot like Bloodgood and other upright Japanese maples.  In this photo the maple is getting lost in amongst these Huechera, but in a couple of years it will gain some height and will be an awesome plant with spectacular spring color. Notice the multi branching habit that starts down low.  Ideally I like to see multi stems even lower than that, but these are living plants and even though we can trim them and train them, we can’t manufacture them into identical clones.  They are living things and at times will do as they please.  Our job is to guide them along.

This little beauty is Lion’s Head.  Lion’s Head is a sort of an upright tree, but it has the coolest branching habit of all the Japanese maples.  The branches tend to grow more horizontal but they remind me of standing under a gigantic tree looking upward, but in fact these trees are really small and slow growing.  The leaves are dark green but still one of my all time favorites.

Again, pruning a Lion’s Head Japanese maple is about getting the height that you want, then start trimming the top a little to get it to spread out. At the time this photo was taken, this Lion’s Japanese maple had been in our landscape at our previous house for 8 years and as you can see it was still less than 40″ tall and only about 36″ wide.  But when you look inside the tree the branches look so mature.

Pam is the one who does most of the trimming of the plants in our landscape, especially the Japanese maples and she does a really good job.  This tree she trimmed about three times a year.  Not so much because it desperately needed it, but just to keep it neat and tight and to maintain this slightly rounded, table top shape.

Keep in mind, this tree was right in front of the porch so we didn’t want it to block our view from the porch.  Instead, I just enjoyed sitting on the porch admiring it’s beauty. “Butterfly” is an upright Japanese maple but this one we kept trimmed to a height of about 40″.  Why?  Couple of reasons actually.  One, because of where it was located in the landscape we didn’t want a tall tree that we couldn’t see over or through.  If it were out away from the house farther, then I’d allow it to grow more upright.

Secondly, the variegated foliage with it’s light green, white, and pink colors was so beautiful we wanted to be able to enjoy that array of colors each time we passed by it.

Make sure you watch the video, you’ll see me doing actual pruning of Japanese maples in the nursery!

Grow and Sell Small Plants from Home.  Mine have Earned Thousands of Dollars.

Questions?  Comments?  Post them below and I’ll do my best to reply to them.

'Blue Angel'hosta is by far one of my favorite blue hostas. A big hosta like this in a perennial bed covers a lot of area and that keeps a ton of weeds at bay! These giant heart shaped leaves are very slug resistant. We have this plant in full sun. With … END_OF_DOCUMENT_TOKEN_TO_BE_REPLACED

'Big Daddy' hosta is one of my favorite big hostas, mostly because it's big, it's blue and it has very interested leaves that are a bit dimpled. Big Daddy hosta gets about 24" tall and 36" wide. It's hardy in zones 3 through 9, the flowers are blends of … END_OF_DOCUMENT_TOKEN_TO_BE_REPLACED

We sold out of 'Humpback Whale' hosta pretty early this year. Humpback Whale is pretty impressive hosta and this one really hasn't matured yet because they can get three feet high and 7 feet wide. I've also seen photos of them that show them to be a lot … END_OF_DOCUMENT_TOKEN_TO_BE_REPLACED

How pretty is that? And it's a ground hugging perennial that comes back year and year. These plants were new to our nursery last year so Pam and I planted three of them in our landscape at home. Not only did they do really well last year but they wintered … END_OF_DOCUMENT_TOKEN_TO_BE_REPLACED

I've been working on my perennial bed at the nursery and this Electric Red Dianthus caught my eye and was screaming "make my picture". So I did! Dianthus in general are great perennials for your garden. They are super winter hardy even here in cold … END_OF_DOCUMENT_TOKEN_TO_BE_REPLACED