Home » Gardening » Winter Tree and Shrub Transplanting Tips and Why Now is the Ideal Time .

I am going to talk to you about Winter Tree and Shrub Transplanting Tips and Why Now is the Ideal Time.

People really get confused about when to transplant what and how to go about it.  So today I hope to dispel some of those issues and put a few gardening myths to rest.  What are we doing around the nursery right now?  Digging like crazy, that’s what.

It’s December 7th and Duston and I just dug these Japanese maples two days ago. Transplanting Season Begins after the 1st Hard Freeze in the Fall.

It takes a hard freeze to trigger plants into dormancy.  Not a frost, but a really hard freeze where the temperatures dip below 32 degrees F. for a period of at least a few hours.  Once that happens, the plants go to sleep for the winter and rest.  And since they are dormant and resting, it’s the safest time to transplant them.  For most things, especially deciduous plants, it’s the only safe time to transplant them.

Transplanting Season Ends as Soon as Trees and Shrubs Make Leaves in the Spring.

So there you have it!  The actually transplanting season starts at the very end of the growing season and ends at the beginning of the growing season.  In the nursery business we often find ourselves anxiously twiddling our thumbs waiting for that first freeze in the fall so we can start digging (harvesting) plants.  Then come spring we dig like crazy knowing full and well that once the leaves appear it’s game over until late fall.

Now there are some exception to these rules.  For instance, evergreens have a different set of rules.  They cannot be dug during the spring or the early summer because they are loaded with soft new growth and they are actively growing.  But evergreens quit growing toward the end of summer and the new growth hardens off and towards the end of summer it is fairly safe to dig them.  But this only applies to evergreens and not deciduous plants.

Click here to learn how easy digging and transplanting Japanese maple trees can be.

Think about it this way.  If you are going in for  complete knee replacement would you prefer that your doctor do the surgery while you are awake or while you are in a very deep sleep?  It’s a silly question I know, but it’s the same for your plants.  They need to be almost comatose before they can be safely transplanted because during the process of transplanting roots are severed and if the plants are awake when that happens they will go into shock just like a human being does when the human body is severely injured.

Should You Cut Roots When Transplanting or Should You Dig Deep So You Don’t Cut Any Roots?

Not only is cutting roots when transplanting okay it’s recommended because when a root is severed the plant immediately goes to work replacing the roots that it lost.  The new roots are called lateral roots because they are not growing out away from the tree but they are growing pretty much perpendicular to the root that was severed.  What this does is create more roots, and more fibrous roots.  Fibrous roots are good because they are quicker to pick up water and nutrition than old established roots. 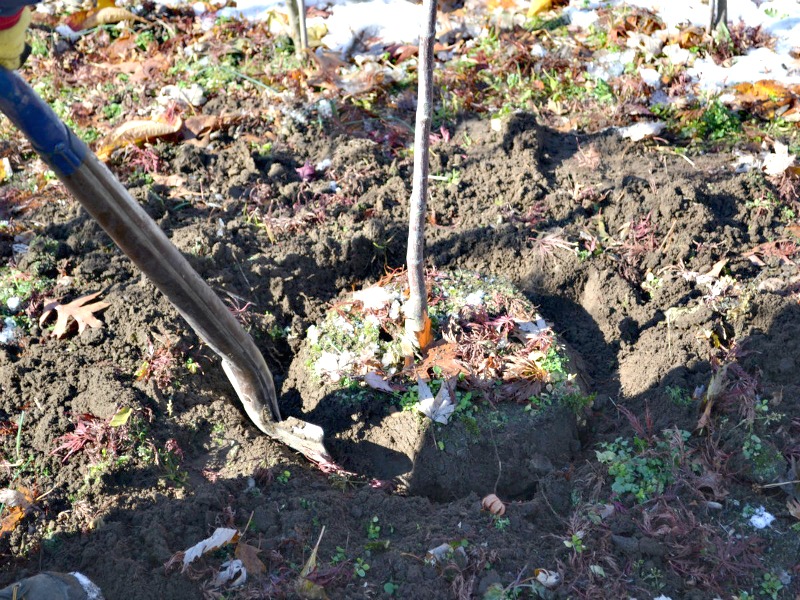 In the nursery business we routinely and intentionally root prune our plants so they develop good strong root systems.  Rooting pruning is extremely important in the production of plants, especially trees.  Most root pruning occurs when plants are transplanted out of one growing area and put into another.  Sometimes with small trees we put them in bottomless pots and put the pots on a wire bench instead of the ground so that as the roots try to grow out the bottom of the container they are exposed to the air and the tip of the root is killed back.  This is called air pruning and it really helps to produce small trees with spectacular root systems.

If we don’t air prune small plants then we actually pull them out of the container and cut the roots.  This makes the root systems fill out more and at the same time it breaks the cycle of root girdling that will take place with any container grown plant after a period of time.

Planting and transplanting are two completely different things, but people often confuse the two.  For the most part the planting season runs 365 days a year as long as the ground is not frozen.  Even planting into frozen ground won’t hurt the plant if you can actually dig the hole.  Planting is the act of putting a plant into the ground.

Transplanting is the act of first removing a plant from the ground and involves the digging of the plant out of the ground, doing damage to some of the roots.  Transplanting is very traumatic to non dormant plants, while the act of planting a plant is almost a non even as far as the plant is concerned.  All of the damage and trauma happens in the digging of the plant.  None happens with the planting of a plant.

It’s really important to note the difference between the two. In the above photo I just dug this Japanese maple tree and I’m sure I severed a number of roots in the process.  That won’t hurt the tree and in the end it will really help it to develop more fibrous roots and as soon as the tree is planted into it’s new location it will quickly root into it’s new home.

From this point all of the trauma that this tree is going to experience has already happened.  It’s been dug.  Now I have to wrap the root ball in burlap. Notice how the pinning nails have a rounded head to protect your fingers as the nails are pushed into the ball?  When pinning a root ball you actually use the pinning nail as leverage to hook a flap in the burlap and pull it tight against the rest of the root ball.  Then the nail is pushed over almost 180 degrees so it’s parallel to the root ball then it’s pushed in tightly.  The nail holds the burlap tight and the tension on the burlap actually holds the nail in place.  The process is similar to using a chain binder to pull a steel chain tight to tie down cargo.

Once the root ball is tightly pinned the digging process is finished.  From this point on the tree is safe and sound and can be sold and planted at any time.  We are digging these now in the fall, we are setting them in our holding area and over the winter we are covering the root balls with leaves to give them a bit of insulation but mostly to keep the wind and the sun off the ball.  They will freeze but it won’t hurt them as long as they are not allow to dry out.

From this point on those tree can be sold and planted at any time of the year.  Wanna know a secret?

Plants are Happiest in the Ground!

That’s the secret.  When you buy a plant and take it home the absolute best thing you can do for that plant is to get it planted as soon as possible.  Plants are happiest in the ground, they are not all that happy sitting on top of the ground, nor are they very happy being grown in a container.  Doesn’t matter what time of the year it is, as long as the ground is not frozen solid you can and should install the plant into it’s permanent home.

These are the Japanese maples that we recently dug.  We covered the root balls with leaves.  Some of the leaves have shifted and settled in between the root balls which is a good thing.  We’ll add more leaves now for the rest of the winter.  We also use rodent bait stations in this area because these leaves make things so nice and toasty that field mice and other rodents will nest between the root balls and during the winter they will actually feed on the stem of the trees chewing off the bark and the cambium layer which can be fatal to the tree.  It’s hard to imagine that a mouse or a rabbit can kill a tree, but they can. If you look closely in the above photo you can see the green PVC pipe between the rows of plants.  That’s a bait station.  I use the PVC pipe to keep dogs etc. from finding the bait as well as keeping the bait out of the weather a little.  The bait that we use is weather resistant.  It’s made for farm use.

How Big Should the Root Ball Be?

The rule of thumb is that for every once inch of tree caliper you should have about 11″ or 12″ of root ball.  A tree that has a caliper of 1″ would need a root ball approximately 12″ wide.  Tree caliper is the diameter of the trunk measured six inches up from the soil line.

I made the decision to dig all of these Japanese maples last summer because I want expand the pasture area for The Miniature Donkeys.  I also wanted to sell these before they get too big to handle.  But we couldn’t do anything but wait until we got our first hard freeze.  In the nursery business it’s often “wait then hurry up!”  I knew that we needed to dig them, but we just couldn’t get started until about a week before Thanksgiving.  Then it’s dig like crazy before the ground freezes.

Transplanting at the Right Time of the Year is Crucial.

You have to plan ahead then execute you plan at the precise time. I knew that I needed to dig these two Lynnwood Gold Forsythia but I’m not even sure what I’m going to do with them or where I want to plant them.  But they were in my way and I knew that I had to dig them and I had to do it while they are dormant.  So I dug them and just heeled them into my potting soil pile for now.  Come spring I’ll do something with them.

In a few weeks  I am going to cut the daylights out of them and I should get at least 1,000 hardwood cuttings from them.  Doing hardwood cuttings is also a winter sport, so we’ll be making those cuttings and sticking them soon.  They’re dormant so they won’t root until spring, but they will root just about the time they start making leaves.

I hope that I’ve explained this well enough, but if not, just post your questions below.