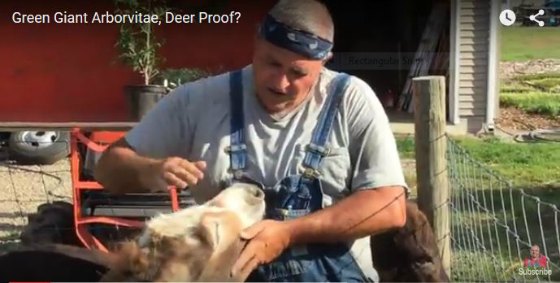 Mike and Finnegan getting ready to do a video.

In the past few years Green Giant Arborviate has become a bit of an Internet sensation of the plant world.  Often touted to grow as much as 36″ per year, being billed as the perfect plant for an instant evergreen hedge. 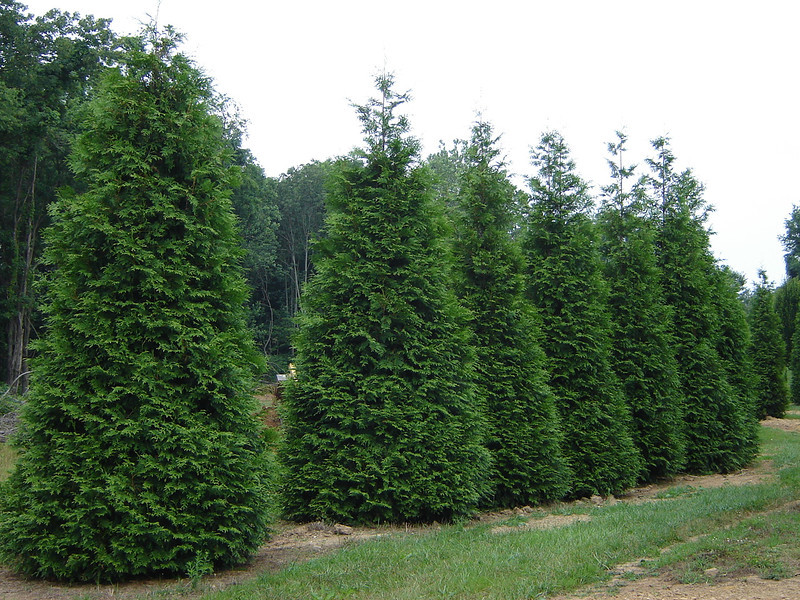 This photo is courtesy of George Weigel a garden writer and horticulturist from Pennsylvania.

Sounds wonderful right?  Not to me.

Admittedly there are some images online that make them look very desirable.  So in all fairness to this fast growing evergreen, I’m sure there are places where it can be used effectively.

First of all, I concluded years ago that the quality of a plant is determined by how fast or slow the plant grows.  Forsythia grows like a weed.  For the most part, it is pretty much a weed.  I’ve landscaped over 500 homes and not one time did I put a Forsythia in one of those landscapes.  I just don’t like them.

For me many Arborviates fall into that same category.  There are about three that I like and Green Giant is not really one of them.  It grows too fast, gets way too tall too fast, and it is most certain to get pulled to the ground with a heavy, wet snowfall.  Trust me, it will happen and from that day on getting them to stand straight again will be a “rest of your life” project.

I do have a couple of favorite Arborviates, they are Emerald Green, Dark Green, and Techeny Arborviate.    Those are the three that I like the best.

How to Root Cuttings of Green Giant and other Arborviates.

Arborviate are actually pretty easy to grow from rooted cuttings.  On this page I show you exactly how I do it.

To me, Techney Arborvitae, also known as Mission Arborviate, is the class of the field when looking for an arborvitae to use as an evergreen hedge or screen.  They are more difficult to find, because they are slower growing and many growers prefer to grow one of the faster growing varieties.  Dark Green Arborviate is a reasonable substituent if you can’t find Techney.

Emerald Green can be used as a hedge but you really have to use a double row of them staggered in order to get a nice tight hedge that you can’t see through.  See the photos on this page.

Can You Make Money at Home Growing and Selling Arborviate Rooted Cuttings?

Absolutely you can!  Just because I don’t personally care for Green Giant Arborvitae doesn’t mean that it is not a hot seller.  It is.  It’s a really hot seller.  But then again, all arborvitaes are good sellers.  Here’s the thing about arborviate.  This is not a plant that people just one of two of.  Everybody that buys them is looking to put in an evergreen hedge.  All too often I hear about the neighbor and his antics that they no longer want to see.  They want an evergreen hedge and they want it to fill in fast!

Inside of Our Members Area Green Giant Arborviate and all the other arborvitaes are super hot sellers.  Members are always looking for Arborviates.  Often times they have customers asking so they come to the members area looking to buy them.  We actually have  a buy/sell area for Canadian members so they can buy and sell to and from on another.

Large wholesale growers are often looking for additional rooted cuttings or liners that they can buy because their own supply often fails to keep up with the demand.  Arborvitae really are hot sellers.  The three that I think sell the best are Green Giant, Emerald Green, Dark Green and Techney.

Friend of mine had a field of arborviate plant near Lake Erie and there were plenty of deer around that field.  Probably going down to the lake for a drink.  He had three varieties in the field.  Techney, Emerald Green and Green Giant.  Hundreds of each of them.  The deer ate the daylights out of the Emerald Green and Techney.  The Green Giant?  Not so much.

But I think that all this proves is that Green Giant is a bit deer resistant if you have plenty of other things near by that they would much rather eat because I hear lots of stories about deer eating Green Giant Arborviate.

We decided to make a movie, pretty much about my dislike of Green Giant Arborviate, and as we often do we decided to shoot the movie in the donkey pen as we often do.  As we were shooting the movie Fergus took a bite out of the Green Giant Arborviate that I was holding.  Then he came back for a second bite!  What does that tell you?  It must not have tasted that bad.  Here’s the movie.

Why does Mike McGroarty Dislike Green Giant Arborviate So Much?

Because of all of the Internet hype about this plant I decided to buy a few hundred and plant them in the nursery just to see how they did.  They grew fast.  That’s really all I can say about them.  After a couple of years they still looked like the dickens.  My Emerald Green Arborviate and Dark Green Arborviate look really good in the  same amount of time.  Green Giant?  Not so much.

That tells me all I need to know.

The grower next door had some that he let grow to a height of 60″.  I still didn’t like them.  I really have a difficult time recommending them to my customers.  In the end I always end up showing them Dark Green or Emerald Green.  If I had Techney I’d show them those.  But currently I don’t have any.

So I still have Green Giant Arborviate in the nursery because I really have a difficult time selling things that I personally don’t like.

'Blue Angel'hosta is by far one of my favorite blue hostas. A big hosta like this in a perennial bed covers a lot of area and that keeps a ton of weeds at bay! These giant heart shaped leaves are very slug resistant. We have this plant in full sun. With … END_OF_DOCUMENT_TOKEN_TO_BE_REPLACED

'Big Daddy' hosta is one of my favorite big hostas, mostly because it's big, it's blue and it has very interested leaves that are a bit dimpled. Big Daddy hosta gets about 24" tall and 36" wide. It's hardy in zones 3 through 9, the flowers are blends of … END_OF_DOCUMENT_TOKEN_TO_BE_REPLACED

We sold out of 'Humpback Whale' hosta pretty early this year. Humpback Whale is pretty impressive hosta and this one really hasn't matured yet because they can get three feet high and 7 feet wide. I've also seen photos of them that show them to be a lot … END_OF_DOCUMENT_TOKEN_TO_BE_REPLACED

How pretty is that? And it's a ground hugging perennial that comes back year and year. These plants were new to our nursery last year so Pam and I planted three of them in our landscape at home. Not only did they do really well last year but they wintered … END_OF_DOCUMENT_TOKEN_TO_BE_REPLACED

I've been working on my perennial bed at the nursery and this Electric Red Dianthus caught my eye and was screaming "make my picture". So I did! Dianthus in general are great perennials for your garden. They are super winter hardy even here in cold … END_OF_DOCUMENT_TOKEN_TO_BE_REPLACED