Variegated Liriope is an awesome landscape and I tell you why.  It’s colorful, it flowers, it’s attractive and it’s super easy to care.  I’ve used this plant in landscape plants for years and 20 years later it still looks good.  It never gets too big, it never gets too scraggly, it just looks good.

The only maintenance it needs is to have the top clipped off at the end of the growing season, or really early in the next growing season.  That’s it.  New shoots come from the ground each spring and it looks amazing all summer long. 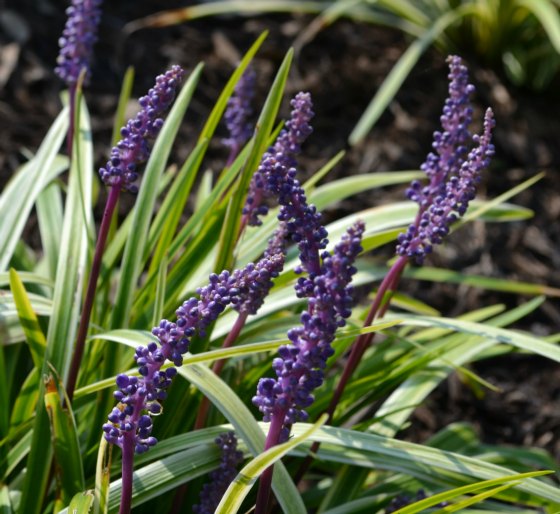 Sometimes I use Variegated Liriope in mass plantings, planted as close together as 12 to 18 inches, other times, often times really, I use it to border a long curved walk.  Or to border the outside of a large planting bed. This is an awesome plant to grow and sell for a lot of reasons but it has great sales appeal because it makes an excellent border plant or can be used in a mass planting, but more important than that it’s a plant that you’ll ever regret using in a landscape.

When I was doing a lot of landscaping there were plants that I used in many, if not most of my plantings and there were plants that I would almost never use in a landscape planting because they grew too fast, were to difficult to care for or just because scraggly over time.  Variegated Liriope was a plant that I was proud to put in my landscapes because I knew it would look good for 20 years or more. This plant is super easy to care for.  I touch mine once a year in my landscape.  At the very end of the growing season, usually mid November here in northern Ohio we simply pull the top of the plant up into a “ponytail” with one hand and clip off that pony tail below the hand being used to hold it up.  That leaves just an inch or two of leaf stubs sticking up.

Come spring the new leaves will emerge and completely engulf what’s left of the old leaves.  That’s it!  No other trimming required, I never fertilize any of the plants in my landscape, I don’t spray them, I just enjoy them.

The best and easiest way to propagate this plant is through simple division.  It is the nature of the plant to keep producing more and more new crowns and those crowns can easily be split off and used to start new plants.

The ideal time to propagate this plant is in the very late fall, or early spring.  The top of Variegated Liriope does not die back quickly and obviously during the winter months.  It droops down but doesn’t really lose it color.  And unlike something like Hosta, the leaves remain firmly attached to the plant.

That actually makes dividing it a bit easier.  Gives you a handle to hold on to.

Step one.  Dig out a plant and put it on your work table or potting bench. This is a complete plant that I simply “popped” out of the ground with a spade.  The first thing I’m going to do is rough this plant up a bit by banging it on the potting bench the knock away any excess soil that I can.  The goal is to expose and loosen the roots as much as possible. Mission accomplished.  After rough up the plant a bit I’ve managed to knock loose much of the soil surrounding the roots.

Step Two.  Begin the process of Dividing the crowns. 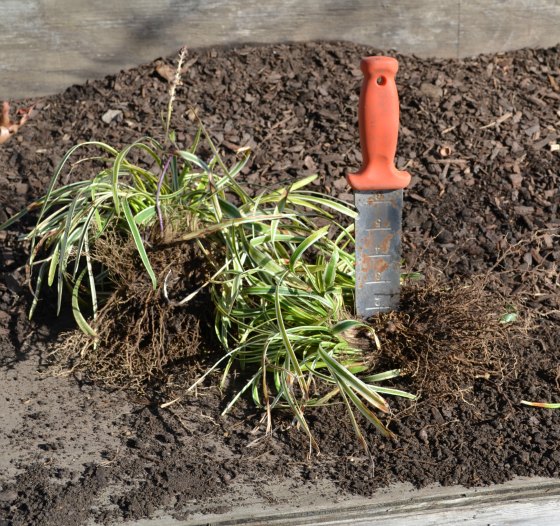 You can pull the crowns apart any way you can by using your fingers to pry the roots apart and break off pieces of the plant.  This plant was in my landscape for a number of years so the root mass is really tight so I used a soil knife to cut through the middle of the root ball.  After that I was able to tear the plant into pieces with my hands.

Each piece is made up of a single crown. Step three.  Trim the tops of the divisions.

What I do is gather three, four or five divisions in my hand, lining up the crowns at the soil line, then I snip off the tops leaving about an inch or so that will be above the soil line in the pot. 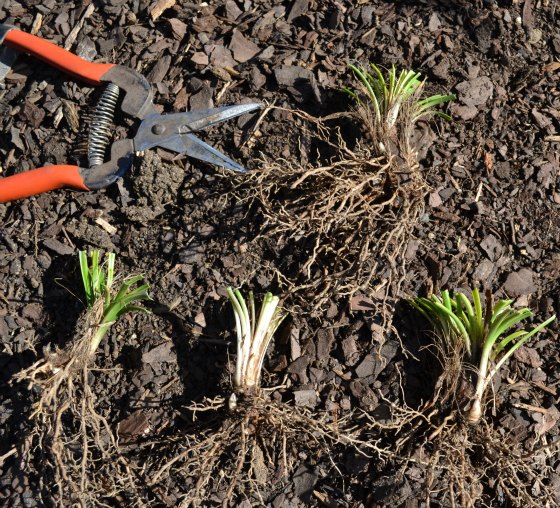 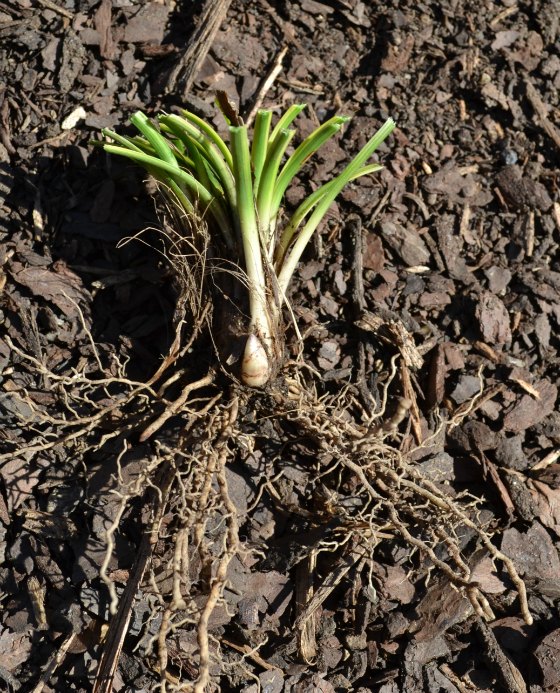 A Variegated Liriope plug or liner.

Actually this is a liner, but not a plug.  A plug is a plant that is grown in a plug tray and can easily be slipped out of the plug tray roots and soil intact.  This is a bare root liner.  And a liner like this is sale-able as is.

Right now In Our Members Area I’m sure there a people that would jump at the chance to buy some Variegated Lirope liners as shown above.  That’s how this business works.  You can’t grow and sell a plant unless you have a parent plant, or a number of parent plants that you can use to start building your inventory from.  Our members are always on the look out for plants like this that they can buy and when they are offered they scoop them up quickly. 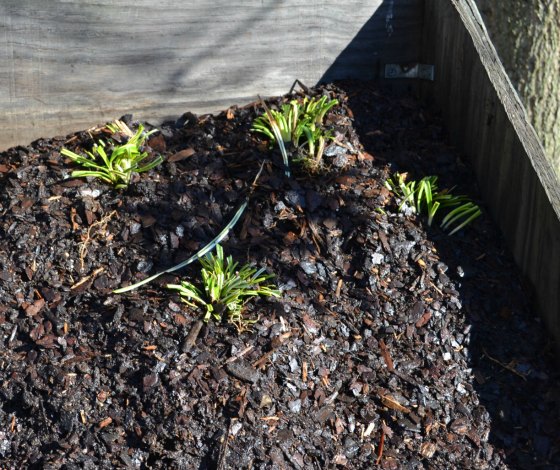 Variegated Liriope liners heeled in ready to be potted.

People are always asking me;  “Mike, what do you mean when you say heel in.”  Basically that means that I’ve simply placed the plants, usually bare root plants, into a pile of potting soil, or sometimes into the ground temporarily.  Usually clumped together like I’ve done here, small bundles then stuck in a hole and backed fill around with soil.

In this case I simply heeled them into potting soil that was already on the potting bench.  Once heeled in I wet them down really well to make sure the roots are nice and wet and to wash the soil down around the roots eliminating any air pockets that could dry out the roots.

Plants are heeled in the ground can stay that way for weeks in mild, not hot weather.  In this case, heeling them in the soil on the potting bench we will get them potted up within the next 24 hours.

As a grower at home you could plant out a bed of Variegated Liriope in your backyard then once a year dig it up and divide it, keep just enough to replant the bed nice and full and sell of all of the extras that you have.  In a situation like that I would plant them 6″ on center and dig them every year and divide them.

Dividing them more often is much easier than what I did here because my plants were older, more established, and pretty well root bound.  Not ideal when growing to divide and sell.  It will work just fine, but if I had a bed to divide often they would come apart nice and easy and I probably wouldn’t have to use the soil knife at all.

There you have it!  Growing, selling and propagating Variegated Liriope.

'Blue Angel'hosta is by far one of my favorite blue hostas. A big hosta like this in a perennial bed covers a lot of area and that keeps a ton of weeds at bay! These giant heart shaped leaves are very slug resistant. We have this plant in full sun. With … END_OF_DOCUMENT_TOKEN_TO_BE_REPLACED

'Big Daddy' hosta is one of my favorite big hostas, mostly because it's big, it's blue and it has very interested leaves that are a bit dimpled. Big Daddy hosta gets about 24" tall and 36" wide. It's hardy in zones 3 through 9, the flowers are blends of … END_OF_DOCUMENT_TOKEN_TO_BE_REPLACED

We sold out of 'Humpback Whale' hosta pretty early this year. Humpback Whale is pretty impressive hosta and this one really hasn't matured yet because they can get three feet high and 7 feet wide. I've also seen photos of them that show them to be a lot … END_OF_DOCUMENT_TOKEN_TO_BE_REPLACED

How pretty is that? And it's a ground hugging perennial that comes back year and year. These plants were new to our nursery last year so Pam and I planted three of them in our landscape at home. Not only did they do really well last year but they wintered … END_OF_DOCUMENT_TOKEN_TO_BE_REPLACED

I've been working on my perennial bed at the nursery and this Electric Red Dianthus caught my eye and was screaming "make my picture". So I did! Dianthus in general are great perennials for your garden. They are super winter hardy even here in cold … END_OF_DOCUMENT_TOKEN_TO_BE_REPLACED