Home » Backyard Living » Putting up a Building in Five Hours!

We were running out of room at the nursery and decided to add an extra storage building that we intend to Use to Pack and Ship Small Plants, Liners and Rooted Cuttings. We have a local company run by an Amish Family that builds all kinds of outdoor storage buildings and this is the second building that they done for me at Mike’s Plant Farm.  The building that I ordered from them is 16 feet by 24 feet with a full loft, a roll up door and a 36″ walk-in door.  The building also has a ridge light, which is kind of a skylight that sits on the ridge of the roof and lets light into the second story of the building.

Duston and I prepared and leveled the site ahead of time so when they showed up on construction day they only had to do a minimal amount of leveling as they laid out the treated four by fours that the building would set on.  In the above photo they are laying out the tounge and grove two by sixes and pulling them tight before nailing to the four by fours. Nailing down the floor boards.

As you can see we had to build one side up quite a bit with 57 limestone.  Now that the building is up we are putting a railroad tie wall along the back side to hold the stone in place. They pre-fab as much of the building as they can in their shop then haul the pieces to the job site.  But the amount of work they still have to do is amazing, and they are incredibly fast and good at what they do. Here you can see the pre-fabbed peak.

You can also see all of my Japanese maples packed together tightly for the winter.  I don’t cover them, we just pack them tightly together and they do fine.  At least so far.  Every winter is a bit different. 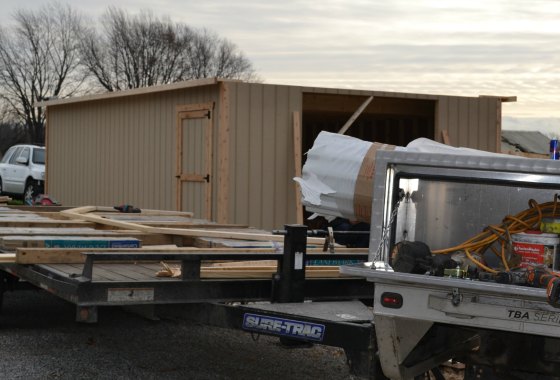 The walk-in door is hung, the siding is hung, and you can sell the roll up door sticking out of the back of the truck.  They’ll hang that last. The trusses are up and the roof sheeting is going on. 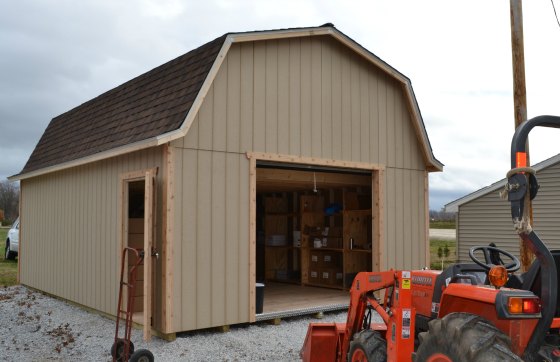 This crew of four or five guys showed up at 7:45 am and by 2:00 pm they were completely done, job site cleaned up and they were on their way.  To me this is just amazing!  Before the day was over we moved about four pallets of supplies into the building the same day it was built.

At some point I might put a loft door above the overhead door so we can toss supplies in that way rather than carry everything up the steps.  With the front end loader it would be very easy to load into the building with a loft door. Building done, some supplies moved in.

You can see the stair case in the back that goes to the full loft.  The ceiling height on the first floor is only about 6′-6″ simply because this is really just a large storage shed, but that’s more than high enough for all of us.  We’re all short! From the inside looking out.

Another option that I am contemplating is to insulate the first floor of this building and install one or two small electric heaters both for working in the building and there are certain times of the years when I get plants shipped in that are too tender to be out in the cold in the spring.

I just store them on my trailer and move them in and out as the weather dictates.  This is usually in the spring when we are just a week or two away from the last frost date.  Rather than take a chance and potting things like that I hold on to them until I think it’s safe to put them outside permanently.

And there you have it!  A 16′ by 24′ building with a full loft.  And because I know some will be curious the cost of this building delivered and assembled was about $8,500.

In comparison, it cost me just a tad over $1,000 to build an 8′ by8′ donkey shed with no insulation and no floor.  And don’t even ask me how long it took me!

Then after that first really cold winter with temps of -15 degrees F. I decided to Build them a Warmer House! Fergus is still licking the fence.

When I told you the Donkeys were Running for President I mentioned that Fergus is a bit of a fence licker.  He’s still at it, but he doesn’t really lick the fence, he ends up with his upper lip resting on the fence and he wags his tongue but doesn’t really touch anything with it.  It’s the craziest thing ever and it’s what makes him Fergus!

Questions, comments, mean things to say?  Post them below.

'Blue Angel'hosta is by far one of my favorite blue hostas. A big hosta like this in a perennial bed covers a lot of area and that keeps a ton of weeds at bay! These giant heart shaped leaves are very slug resistant. We have this plant in full sun. With … END_OF_DOCUMENT_TOKEN_TO_BE_REPLACED

'Big Daddy' hosta is one of my favorite big hostas, mostly because it's big, it's blue and it has very interested leaves that are a bit dimpled. Big Daddy hosta gets about 24" tall and 36" wide. It's hardy in zones 3 through 9, the flowers are blends of … END_OF_DOCUMENT_TOKEN_TO_BE_REPLACED

We sold out of 'Humpback Whale' hosta pretty early this year. Humpback Whale is pretty impressive hosta and this one really hasn't matured yet because they can get three feet high and 7 feet wide. I've also seen photos of them that show them to be a lot … END_OF_DOCUMENT_TOKEN_TO_BE_REPLACED

How pretty is that? And it's a ground hugging perennial that comes back year and year. These plants were new to our nursery last year so Pam and I planted three of them in our landscape at home. Not only did they do really well last year but they wintered … END_OF_DOCUMENT_TOKEN_TO_BE_REPLACED

I've been working on my perennial bed at the nursery and this Electric Red Dianthus caught my eye and was screaming "make my picture". So I did! Dianthus in general are great perennials for your garden. They are super winter hardy even here in cold … END_OF_DOCUMENT_TOKEN_TO_BE_REPLACED